"Qun Shu Zhi Yao" is a selection of ancient Chinese political books. The famous admonishers Wei Zheng, Yu Shinan and Chu Suiliang in the early Tang Dynasty were appointed to Emperor Taizong Li Shimin (599-649) in the early years of Zhenguan. State", a masterpiece of Kuang Zheng that created the "rule of Zhen Guan" to provide warnings. --The content is from Baidu Encyclopedia and "Qunshu Zhiyao 360" organizes the words of "Qunshu Zhiyao" into six outlines: emperor, ministerial, virtue, governance, prudence, and discernment, each In the outline, a number of items are summarized, which provide valuable guidance and reference for modern people's morality, cultivation, work, study, and life.

The main learning content of our tenth Chinese Classics recitation class is this "Book of Emperors".

The beginning of the new Chinese Studies class is to worship Master Confucius.

Under the leadership of Teacher Zheng, the new students in the new semester all expressed their inner respect to Master Confucius.

During the worship, Teacher Zheng solemnly reminded and instructed us how to pray four times.

What is the four prayers? The Four Worship Ceremony is the most solemn ceremony among the traditional Chinese etiquette. Four prayers are a great gift to heaven and earth, the father and the master. The Ming Dynasty's "Tong Zi Li" recorded: "Any way to bow down, one tweet and less retreat. Another tweet. That is, prostrate. Press the ground with both hands. Kneel your left foot first, bend your right foot second, and then stop to the ground. Get up. Raise your right foot first. Press the knees with both hands, raise the left foot again, and still bow before bowing. The manners are respected by the gentleness, not urgency." When the four prayers are performed, you must get up and bow and bow again. 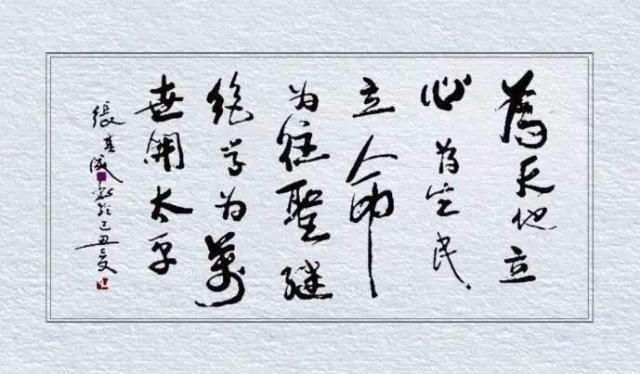 During the service, Mr. Zheng led us to recite in unison Mr. Zhang Zai's "Four Sentences in the Hengqu": Establish the heart for the heaven and the earth, establish the life for the people, continue the sacred learning, and create peace for all generations!

What is meant by "building the heart for the heaven and the earth"?

What is "making life for the livelihood of the people"?

"Mencius. "Zhuxinshang" says: "He who does his best, knows his nature. Knowing his nature, knows the heavens. Keep his heart and nurture his nature, so it is a matter of life. A young life is not a two-year old, so you can cultivate your body to die, so Liming also." Ancient scholars are themselves, self-cultivation is based on the destiny. However, my generation of scholars is not only for themselves, but also for the world. "Liming" is used to teach "Liming", that is, "cultivating the Tao is the teaching", which means that the life is for the life of the people.

What is the sacred learning?

"Going to the sage" means the great Confucianism in ancient times, but the sage is not limited to Confucianism. The meaning of this sentence is naturally to inherit and carry forward the thoughts and doctrines of the pre-Confucians, but it is not only the doctrines of Confucianism. Confucianism, as the dominant ideology of traditional Chinese society, has never stopped or stopped, and there is not only one voice in society. Scholars of our generation not only need to learn and penetrate the thoughts of the "Going to the Sacred", but also to use this as a basis to work hard to supplement and improve the "Sacred To The Sacred". This can be a sacred learning for the past.

What is meant by a peaceful world?

"The world is peaceful, everything is peaceful", "Taiping" is the ultimate social and political ideal of Confucianism, and it is also the ultimate goal of scholars. "Kai" has the meaning of opening up, and scholars should take this as the goal, inspiring to become a pillar of society, benefiting the people, and benefiting the world.

These short four sentences are not only a consolation to the sages, but also a research goal we set for ourselves. It is an ambition, an ideal, and a declaration that inspires our high enthusiasm and infinite yearning for the word "learning". Teacher Zheng specifically urged us to have a loud voice. I understand that these four concise and magnificent sentences are not only for the sages and great scholars, but also for ourselves!

When Mr. Feng Youlan wrote the four verses of Zhang Zai in his later years, he left a seemingly helpless sentence, "Although I can't come, I am longing for it." If the "Hengqu Four Sentences" have exhausted the lofty ideals that Chinese scholars have been pursuing for more than two thousand years, then Mr. Feng Lao's words have shown that "knowing that you can't do it" in the scholars of the past generations. "The belief.