At 4 pm, the closing ceremony started on time. As the executive director of this project, Mr. Yao Weijia showed the participants the proud performance and creation of the students in the past ten days with a wonderful video.

Professor Sun Yixue, Dean of the School of International Cultural Exchange of Tongji University, shared with everyone the poems he wrote on the opening day of the "Chinese Bridge".He Tongji's "Chinese Bridge" opened.

The rain and the dust must be cleaned up, and the flowers spit out the thin pistils for fear of wet clothes.

When the cold is gone, the soles of the feet are warm, and when spring comes, I also put a pen on it.

I envy the youth of the world and listen to new poems on the pentagram.

In times of difficulty, we are more aware of our fate, and we have no confidant. 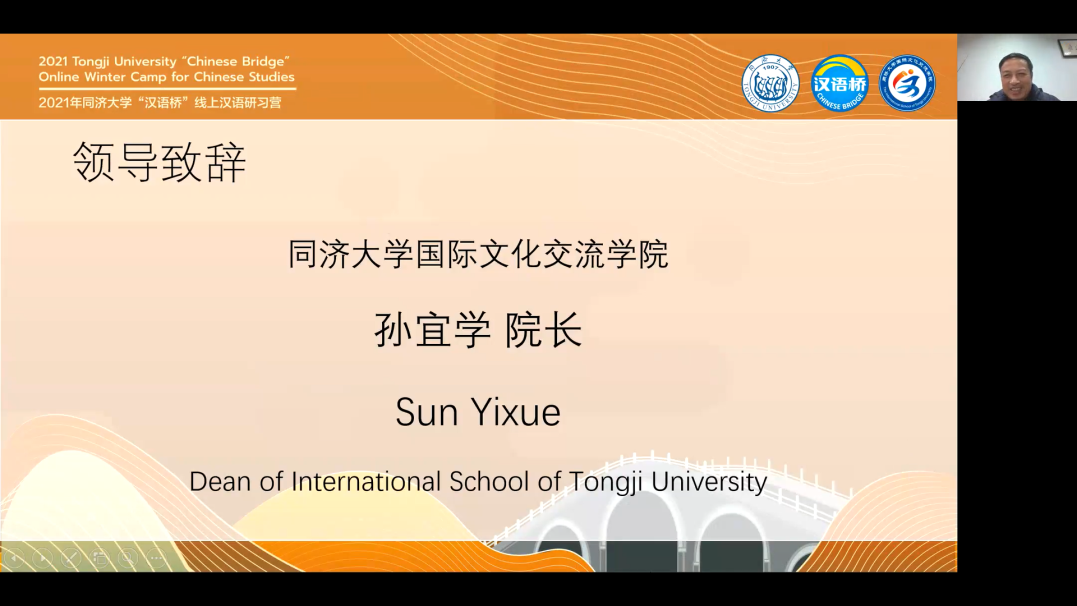 After reading sentence by sentence, the dean hopes that everyone will unite and trust each other in difficult times, and make friends on the bridge of cultural exchanges.

Director of the Chinese Department of the Faculty of International Languages and Culture of Oberlin University, Italy, Confucius Institute at the University of Florence, Italy Mr. Zhang Lun and Chinese teacher Ms. Hui Hui attended the closing ceremony as guests of the cooperative Confucius Institute.

Ms. Bettina Griess, Mr. Yang Guangjun, and Ms. Hui Hui delivered speeches successively as guest representatives. They warmly congratulated the students on the successful completion of the training, encouraged them to continue bravely on the road of Chinese learning, and highly affirmed the organization of the "Chinese Bridge" Arrangements and teaching results, look forward to more in-depth cooperation and exchanges with Tongji.

He also said that students who have obtained the "Chinese Bridge" certificate of Tongji University will apply under the same conditions. Be given priority. Upon hearing this, the students immediately issued a long series of "applause" and "like" icons.

Two representatives of the campers brought impressive speeches. Mr. Sasaki Koji from Ritsumeikan University in Japan spoke in Japanese at the opening ceremony and was translated by Mr. Yao.

At the closing ceremony, he completed the speech in both Chinese and Japanese by himself. The Chinese were clear and concise. The word is smooth, the progress is amazing!

Classmate Xie Meixing from Vietnam recorded a touching video and sang "Love That Never Lost Connection" to express his affection for Tongji. In addition to them, more students wrote in the feedback questionnaire their thanks to teachers, volunteers, and Tongji. These sincere words recorded the unforgettable ten days and made the teacher lively.

In the "Great Reunion" session, Zhang Liyun, a 2019 Han and Master student of Tongji University brought a "Shanghai Dialect Class", which made everyone happily learn the most basic Shanghainese phrases.

Finally, the students all claimed "like"! All the students in Class 5 in the morning under the guidance of Teacher Liu Genhong brought the witty "Chinese Riddle". It seems that the special live broadcast of the Lantern Festival left a deep impression on the students.

Student Ouyang Lukas from Germany gave everyone a guitar and sang "Me and You" in a beautiful mountain background, and especially changed "Meeting in Beijing" to "Meeting in Shanghai".

This is really close to Teacher Yao because she also adapted this song. Taking advantage of Ouyang Lukai's east wind, after he sang, Teacher Yao led all the participants to sing this "Me and You" especially for Tongji "Chinese Bridge".

The closing ceremony ended in a joyous atmosphere. Although reluctant to give up, everyone knows that the story of the "Chinese Bridge" is still going on and the love affair with Tongji is still going on.